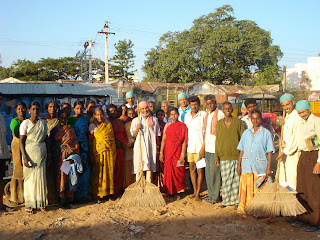 Another Special Economic Zone (SEZ) is coming up in the region in spite of the fat that the people are not on favour of it. The reason behind it is that the people will have to sell off their land for the upcoming industry there .The land was given to the people by the Government long time back under some provision of the caste category. This fact does not allow the people to sell the land therefore the government is planning to bring a provision which will allow the said owners to sell the land so that the SEZ comes up without any difficulty as such.

First, the people do not want to part with their land as it is the only property they have and their livelihood is dependent on it. But if at all the SEZ/ industry .Developmental projects comes then they prefer to go for the partnership with the industrialists rather than selling of their land. This way they ensure a source of income for their coming generations as well.

All these thing indicate that the agriculture is definitely not on the agenda of the authorities and the government .The development in the name of industries is favoured and advocated thinking that the returns will be better and long lasting .A point missed here is that at the end of the day it is again bread that any one needs and not the steel or mobile….The industries definitely are largest employment generating units and boost up the so called economy of the nation but they can never replace Agriculture and the role of the farmer…

Again the call is to have fixed percentage of land for the farming!!!

Apart from this the farmers also called for the need of “Farmer’s Bank”, a credit system that will support the farmer and not force him to end his life due to non payment of the loan and interest .All agreed on the fact that the Banks should be the stakeholders in the produce of the farmer and the interest should be in the form products from the produce and not money.

Anantapur is one of severely affected district of Andhra Pradesh .It has a very high rate of suicide amongst farmers. In one of the villages that the Yatris came across, there were four suicide cases and all because of their inability to cope up with the burden of debt and the inability to repay the money taken for farming. In the absence of any Public agricultural extension services farmers are left with no choice but to depend on the private service for seed, pesticide and other help. The private services function without adequate regulation so the farmers most of the time fail to repay and this eventually leads to the suicide…as it is seen as the only solution …

Agriculture and Farming is awaiting some reforms and hopefully the people who supply the food will not die of hunger …. !!!
Posted by AGRI YATRA at 9:38 PM