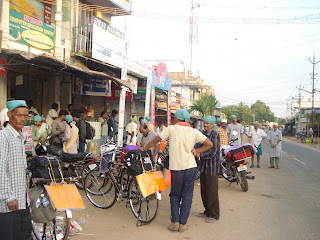 Village :Bodhponam,District Yavatmal
This village has experienced 18 suicides in last 6 years including one woman.
Village:Lonighatna ,District Yavatmal
Year 2004-04 Total of ten suicides cases happened in the village.The list includes:Narayan Debrao, Ramsingh,Vinod Rathore and others
No sort of compensation ever reached the families of these farmers.

Village :Sakhra ,District Yavatmal
Records 5 cases of suicides.Sangla Chauhan, Bhau Ram, Rabu Bhindari,Uttam Chaudhary are a few to name.State Government has given the compensation which included money and cattle .

Compensation however is not the solution to the problem.More and more farmers are commiting suicides under the pressure of debt ,repeated crop failures and poor economic condition .
Posted by AGRI YATRA at 10:18 AM