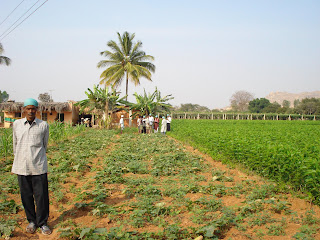 The cycle Yatra team met the Agricultural scientists as well the students of the Rajender Nagar Agricultural University , at Hyderabad.

The scientists were equally worried about the state of Agriculture and the condition of the farmersin the country.There was huge Paddy cultivation all along the highway some ten years back which has just disappeared now .The growing industrialisation has taken away acres of agricultural land .Many suggestions came from them .They felt the need to improve the seed distribution mechnism in the State as well as in the country.

They also pointed out the fact that the in the process of agri producethe farmers get a very little share whereas maximum profit goes to the other proponents.

Dr.Anil Joshi , the leader, advised the Scientists to become Agricultural Advocates as there is an urgent need of AGRICULTURAL ADVOCACY in the country today!!!
Posted by AGRI YATRA at 11:14 PM