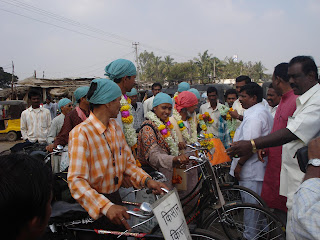 In its course of 26 days, the Yatra team has so far covered 1500 km, met around 26622 farmers from 265 villages of 21 districts of the three states. The Yatra started from Kanyakumari on 12th January and expected to reach Delhi on 11th March.

The Yatra focuses on the issues of:

1. The need of an Agri Act in the country. There should be a fixed percentage of land for agriculture. Growing industrialization and the rate at which the Special Economic Zones are coming up, the agriculture is under pressure. The fertile agriculture land is being sacrificed in the name of development. The farmer today does not want to continue with the faming because the returns are not good. The big industrialist pay a handsome amount to the farmers in return of their land. The farmer sells his land and ends up spending that money in the due course of time.
Almost 50 per cent of the agricultural land alongside the highway between Kanyakumari and Hosur has been sold out to the industrialists. They discovered that the land use change was on a massive scale, from agriculture to industrial purposes. Even farmers’ children were not ready to opt for agriculture as their profession. Almost 98 per cent of farmers’ children are not ready to follow the path of their fathers. They opine that it is not a viable option. The peasants of Tamil Nadu say that there is no respect for the farmers in the State.

Again in Andhra Pradesh at two Places around 200 acre and 300 acre of land is reported to have been sold to for the industrial purposes.

This is a serious threat as this is sure to cause a food crisis in the time to come.The Yatra continues with request and message. It is asking farmers not to sell the agriculture land for any kind of industrial use. If in any case they have to then they should ask for partnership, this will ensure a source of income for the generations to come.

2. The need for a farmer’s Bank is strongly voiced by the Farmers. The bank should fix a price for the produce .The Bank should be the stakeholder in the productivity and the interest should be drawn from the selling of the products. This will reduce the burden on the farmer in terms of money and paying interest. Value added products would benefit both. Bank can easily develop the market for the new products.

3. If at all the need to sell the agricultural land arises it is advocated that there should be a partnership between the farmers and the industrialists, so that the farmers also have a steady source of income and the future of the coming generation is secured .

It should be noted that the percent of population dependent on agriculture, which was 75 percent at the time of country's independence, has now come down to 65 percent. The contribution of agriculture to the GDP has been reduced from 61 percent to around 20 percent. The per capita availability of agricultural land has reduced from 0.36 hectare to 0.12 hectare. The gap between per capita average incomes of those engaged in agriculture and those in other occupations, which was about 1:2 till the 60s has now increased to 1:11.Even the banking system is providing only 30 percent of the deposits made by rural people to them as loan and 70 percent amount is making its way out of rural areas to other sectors for development.


Farmers have responded well to the Yatra so far as the condition of the farmer is becoming worse , this is quite clear from the increase in the rate of the suicide death by the farmers. The farmers and farming definitely want a relief in the form of a more effective mechanism, Agri Act which will fix the percentage of agricultural land in the country on the line of the Forest act. Secondly the banking or rural credit system should be little more farmers friendly. The Yatra is focusing on these issues. The role of the Government is also important here as for the past many years the policies of the State government have been pro–industry which have caused resentment among the farmers and the farming is dying in our so called agriculture nation. The time has come to Act , for the food security in the time to come.
Posted by AGRI YATRA at 10:30 AM