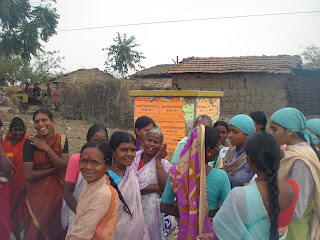 There were cases which reveled the relationship between Governemnt and community.Though in most of the cases public expectation was more from the Government yet,there were few instance where people benefitted by the Government support.
One such case was near River Parbati in Madhya Pradesh.

Inhabitants of Village -Semlapur were crying for water.The village has 180 families and 70%of them were smalll and marginal farmers.There existed a pond in the village and the water was basically being utilised for the agricultural purposes but only by the big and rich farmers.The small and marginal farmers had no means to use the water for their fields as well .It was the big farmers were getting benefit the resource because they had equipments to pump water to their fields.Thus only the bigger farmers were enjoying water boon.The Government was urged to sort this out.Government acted fast and installed seventeen pumps for the villagers.This made a huge difference in their lives .The yield increased and the farmers export onions to Kanpur mandi.There is a new economic wave in the region with small effort made by the Government.

The issue of water also came into the picture when community expressed their concern on the decresing level of water in River Parbati.The exceesive use of the water by industries and for other purposes has in the recent time lowered the water level to an alarming state.
Posted by AGRI YATRA at 9:04 PM