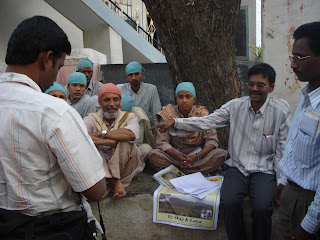 The Yatra reached Telangana where the people are voicing for a separate state to be formed out of north-west region of Andhra Pradesh. The issue was disscussed along with other problems.Ther reasons for separate Telangana are plenty,as stated by the people like:

People can not afford to send their children to schools or feed them three meals a day.

Water is a very important in this region and Telangana is worst affected ispite of the issue fact that rivers like Krishna and Godavari flow through it , but the water from the dams is not available for the people there.It flows to other region of the State.This also forced people to show their worry reagrding the Dam over Godavari which has the water flowing to the State Of Maharashtra.

Thus, issue of the RESOURCE RIGHT is important in this part as well.The people want to have the first right over the resources available with them .That is the reason behind the cries over the issue of interlinking of the rivers.
Posted by AGRI YATRA at 9:15 AM