Mandi and e Choupal-IS THERE ANY DIFFERENCE? 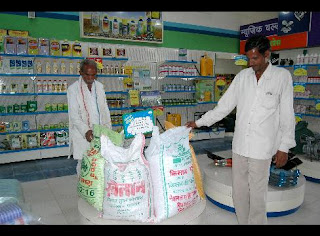 Mandi Operation process:
Inbound Logistics -Display & Inspection-Auction-Bagging & Weighing-OutboundLogistics
Once potential buyers have inspected the produce, a mandi employee conducts the auction, where commission agents place bids. The auctions are typically open oral auctions with incremental bidding.The auction represents a stark contrast from the buyer’s and seller’s perspectives. For the farmer, the moment is pivotal: a scant 30 seconds assesses the results of six months of investment and hard work and establishes the value of one of only two or three paydays he will have in the year. For the commission agent, on the other hand, the moment is routine; he has many more carts of produce to buy and his margin is assured irrespective of the price. Once the price has been established by the auction, the farmer moves the cart to the weighing area run by the buying commission agent. In most cases, the weighing area is in the mandi complex. In some cases, especially if the mandi is small, the weighing area may be at the commission agent’s home near the mandi. Here, the produce is transferred from the cart into individual sacks. The sacks are then weighed,one at a time, on a manual scale. After weighing, the full value of the grain is calculated. The farmer goes to the agent’s office to collect a cash payment. The agent pays a mandi fee (1% of purchase value in Madhya Pradesh) to the mandi. The bagged produce is then loaded on to the buyer’s trucks and transported to the processing plant.
e Choupals do not provide any respite to the farmers because:

So ,there is only dependency and not sustainability