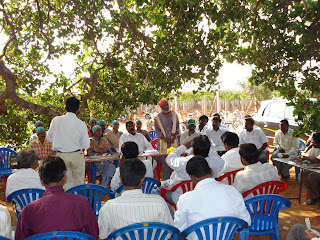 After starting from Hyderabad on 7-02-08 Yatra has entered Telangana.Sharing the past experiences the Yatra talked of the Green Line , which means that every state should review its land use pattern and land reforms so that a line can be drawn for agricultural production.

The Yatra is actually reaching the people.This is clear from the fact that people are reaching to the Yatris.People are raecting and acting to the issues being raised .After reading about the Yatra and its issues Mr.Rangareddy of village Nagraj, Andhra Pradesh shunned the idea of selling his half acre land.He met the Yatris on the way ,discussed the matter and treated them!!

At Kommareddi ,a village in District Mehbubnagar, a farmer called K. Maitrima wanted to sell his 10 acre land but after meeting the Yatra he decided not to do so.It was very encouraging for the Yatris as they are on the mission of spreading te same message!