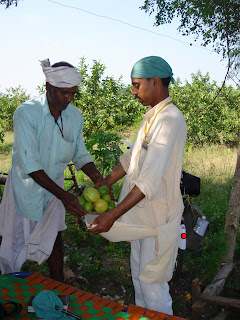 For small farmer, the informal sources of credit are large farmers, input suppliers (seed, fertiliser and pesticide dealers), commission agents who arrange the sale of a farmer’s produce in a mandi or market yard, and occasionally professional moneylenders. The interest rates from these sources vary from 3% per month in the southern states to over 10% per month in the eastern states. Moreover, such credit is often tied – such as the obligation to work in the large farmers’ land as needed, and selling their produce through the same commission agent who advanced a loan for the sowing season. The relationship varies from being mildly unfavourable to the farmer to being highly exploitative, depending on the place.

The Yatris met Dayaram in Yavatmal who works on a sixteen acre land of bigger farmer.Dayaram's family was also employed in the same field.In return of the work the family collectively had been getting Rs.19,000 per annum for last nine years.The owner in turn earns in lakhs.This forces the smalll farmer to continue the same work for many more years and also he can not think of any other option for his kids as the resources are not enough .