A MARCH FROM KANYAKUMARI TO UTTARAKHAND : DR ANIL P JOSHI 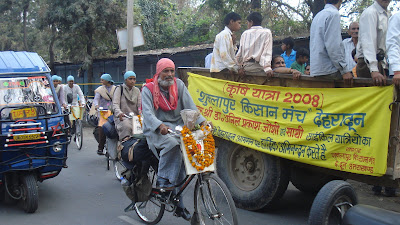 The success of India is certainly based on the economic revolution that the country has borne since its independence. The GDP is showing an upward trend and the rate of growth is 9% annual. But, an anatomy of sectoral contributions in GDP reveals dismaying results. The economic development of the country has been largely enhanced by the industrial, civil and construction sectors. In the agriculture sector and for the farmers, the development has been lop-sided. Thus in India the rural marginal farmers are not represented in the GDP and there is fear that they will not be represented in future too. The reported economic gains of the country are not reaching down to most of the farmers of rural India.The current dismal conditions in rural India could be attributed to many factors but primarily; a lack of relevant social and economic policies for the development of rural India has been a major impediment. Ostensibly, India cannot shine without farmer’s prosperity. In the last 60 years, economic activities both in product-formulation and regional development have not been focused on rural farmers. Thus, obviously much collateral economic development flows in a vertical way, not in a horizontal line. Such pattern of economic growth always has limited impact. The benefits of development were expected to percolate throughout all sectors of society, but instead the benefits of development have only reached a few. Farming society as well as rural India's resources both remains deprived of decentralized benefit-gain. Rural India's identity as primary food producers and guardians of the natural resources is also degenerating fast mainly because of growing negligence of resource rights issue within community. Thus, the poverty and drudgery of rural Indian farmers remains static.Ironically, rural India has become the biggest market for urban products even though the materials for these products come from rural India only. Due to aggressive marketing strategies and better equipped urbans, these products are marketed throughout rural India, the largest market for industrialist. Slow invasion of Industrialists in retail market of fresh products, witness the fact that farm produce are highest in demand in the country.The other attack that has shaken primary producers in India are Special Economic Zone (SEZ).What happened in Nandigram is a farmer’s resentment against such invading policies .It cannot be denied that the country’s economy can only be strengthened through industrialization but not at the cost of the fast depleting agrarian culture of the country .This is going to be social and economical disaster. The present SEZ approach will create a deepening economic imbalance. The SEZ policy must seriously review the matter on common interest plan where immediate and long-term interest of both farmers and industrialists are taken care of .There should be clear shareholding of farmers in a given SEZ .He should not become losers of the land merely for some dough but his long term association with SEZ will guard his future generation also. Since, SEZ are coming in almost all states of the country, landless farmers must be consumed to check the migration which otherwise has begun to take political dissension in many states.
Another important concern that is likely to impair future food security measures is fast decreasing land under agriculture. The growing industrialization has a direct negative impact on the decreasing agricultural land .Due to various other reasons the fertile agricultural land has depleted in the recent times and if the reasons continue, the farmer and the farming both will reach an edge .In no case and circumstances, it cannot be forgotten that industry cannot meet the hunger. It is agriculture only that serves the purpose. Fear of fast depleting agriculture land is a threat for future food security and will lead to social and economical disaster. To protect the forest an Act came in eighties which decided a fixed percentage of land under forest in the country. On the similar lines a provision of a fixed percentage of land exclusively for the agriculture is urgently required in every state of our country. In short An Agricultural Act is the need of the hour. The Act will ensure food security and will prevent any development activity in such land. This would save Farming and farmers both.This is ironical that one who produces food for us is deprived of basic needs and his resentment is coined as terrorism, naxalism etc. As a matter of fact every discrepancy is because of economic imbalances. Therefore, the time has come that we review economic independence of rural India by adopting Pro-farmer policy.An alarming situation has come in the rural India right from Himalayas to the coastal areas of the country where expression of deprived community is visible now in one or other form. Let us begin to realize the deprivation of the farmers of rural India and recast policies that could lead from economic slavery to economic independence of rural India.
Posted by AGRI YATRA at 9:58 PM 3 comments: